In Search Of Damiana

In recent times, the healing potential of medicinal plants has been both dismissed by Western medicine, and appropriated by the modern wellness industry. Seeking to learn about damiana, we traveled directly to the source: Todos Santos, in Baja California Sur, Mexico.

Primitivo García smiled as he held up the damiana shrub with his right hand, its roots hanging, sprinkling pieces of the earth that had held it moments before. This is not the ideal way to harvest the plant (it should be trimmed, leaving it embedded in the ground to regenerate its branches), but Primitivo doesn’t know. A gregarious man in his forties who speaks with the pace and amiable disposition of a twenty-year-old, he became acquainted with damiana only recently. To locals and tourists alike, he sells it at the plant nursery that he owns and operates on the roadside outside Todos Santos, a small but quickly-developing Mexican town in the southern tip of the Baja California peninsula.

The Pacific crashes on the shore of Todos Santos and recedes in a caress. This is not the powder-white coast of Tulum — as a whole, the sands here appear a caramel brown; upon closer inspection, multi-hued specks of gold and black. Inland spans a mostly monochromatic desert of low shrubs punctuated by cacti, their limbs raised in a sun salutation not unlike the ones adopted every day across town by pupils of the yoga studios that have begun popping up. Due to its proximity to the Sierra La Laguna biosphere, Todos Santos is one of Mexico’s most biodiverse regions, combining virgin beaches, desert landscapes, and lush forests. The town itself is nestled amid an oasis bursting with palm trees. 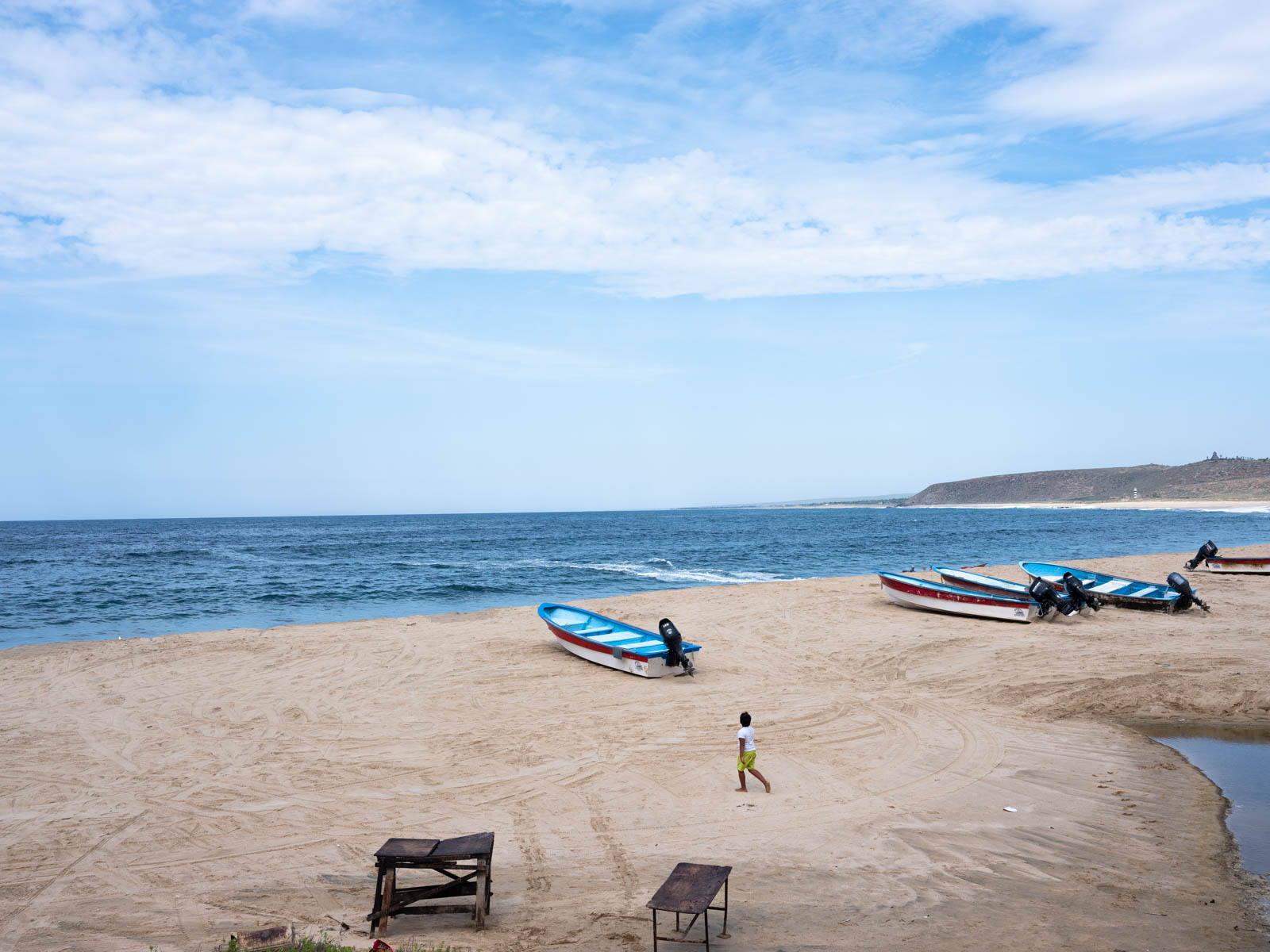 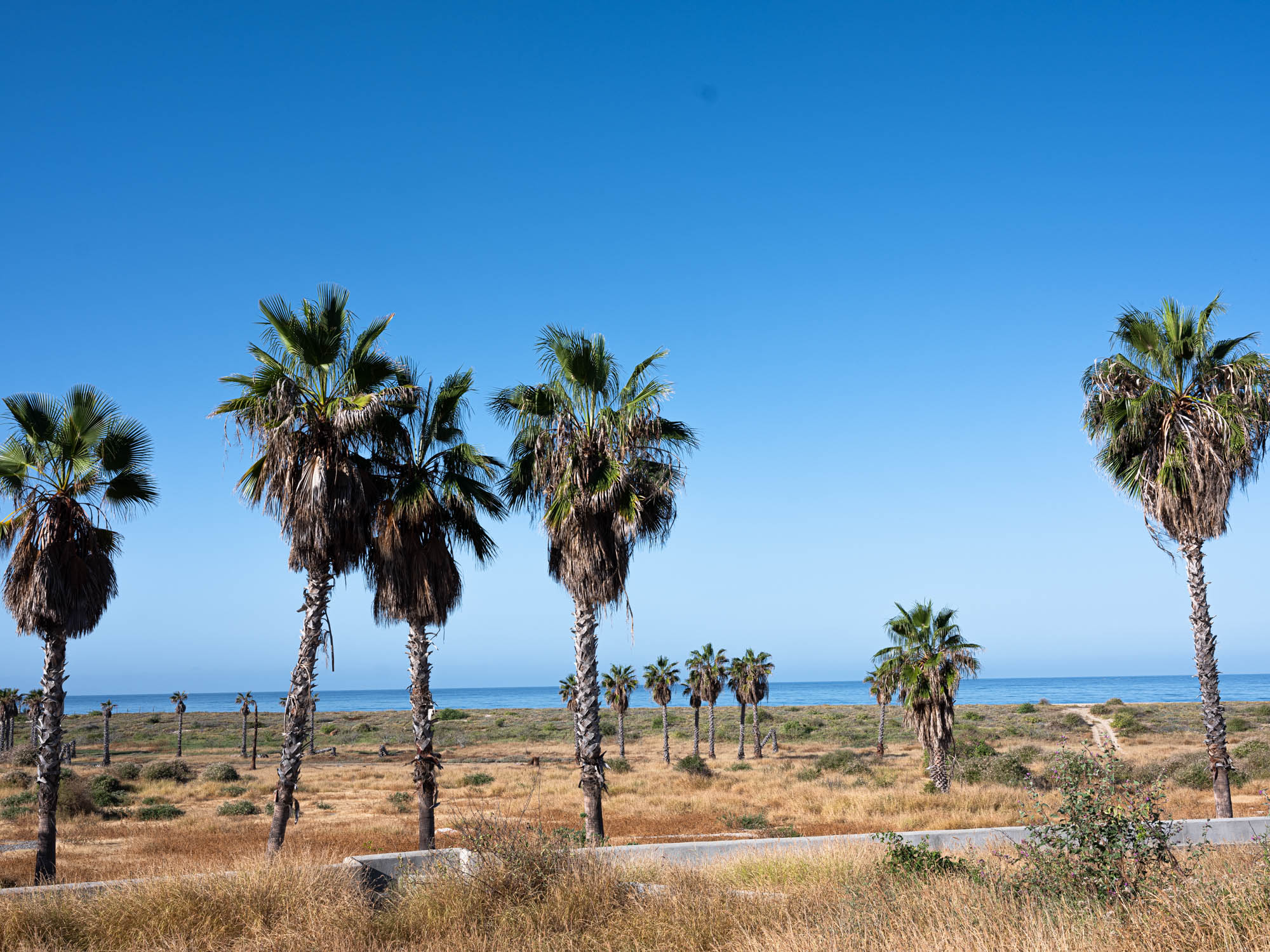 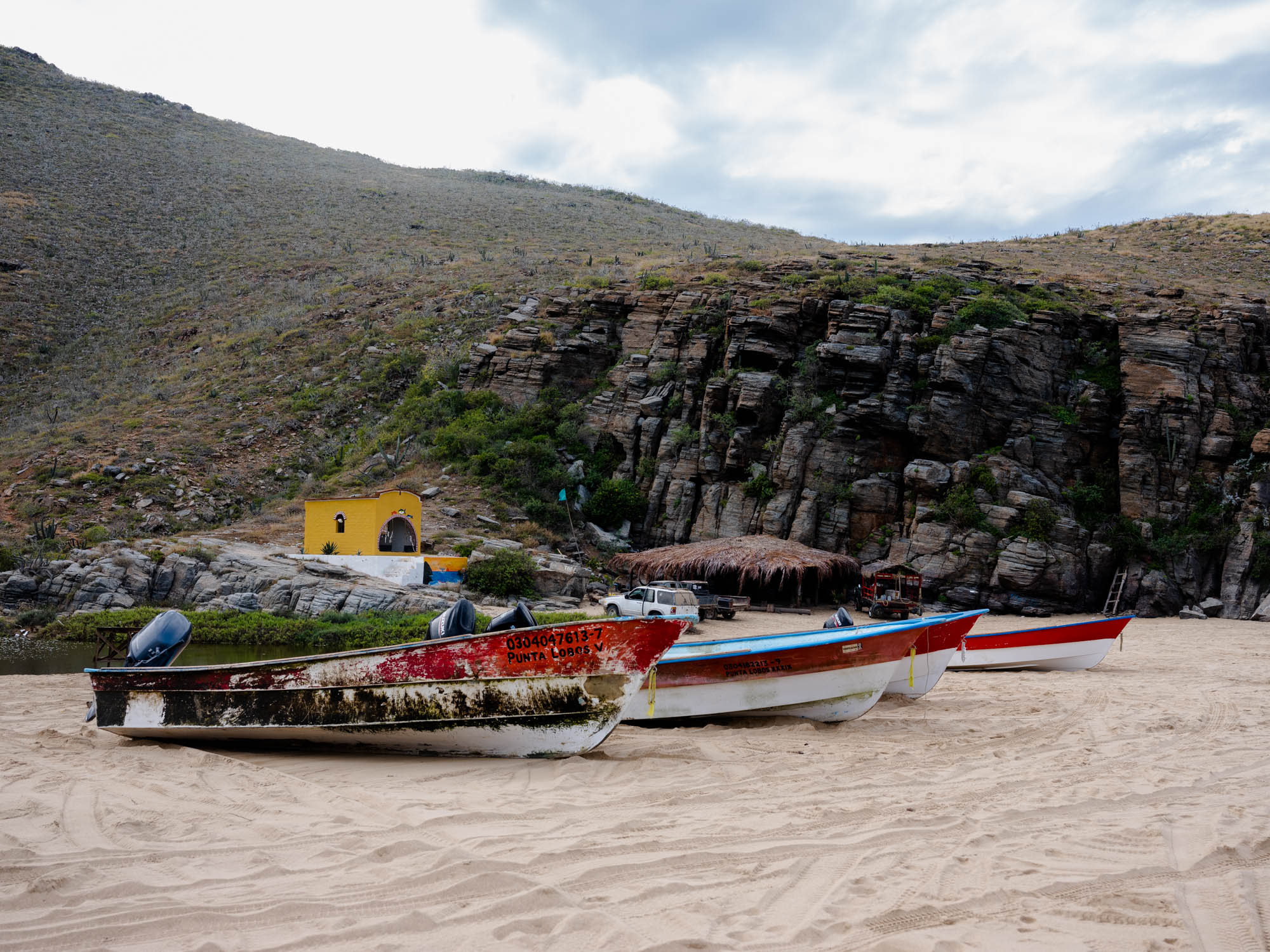 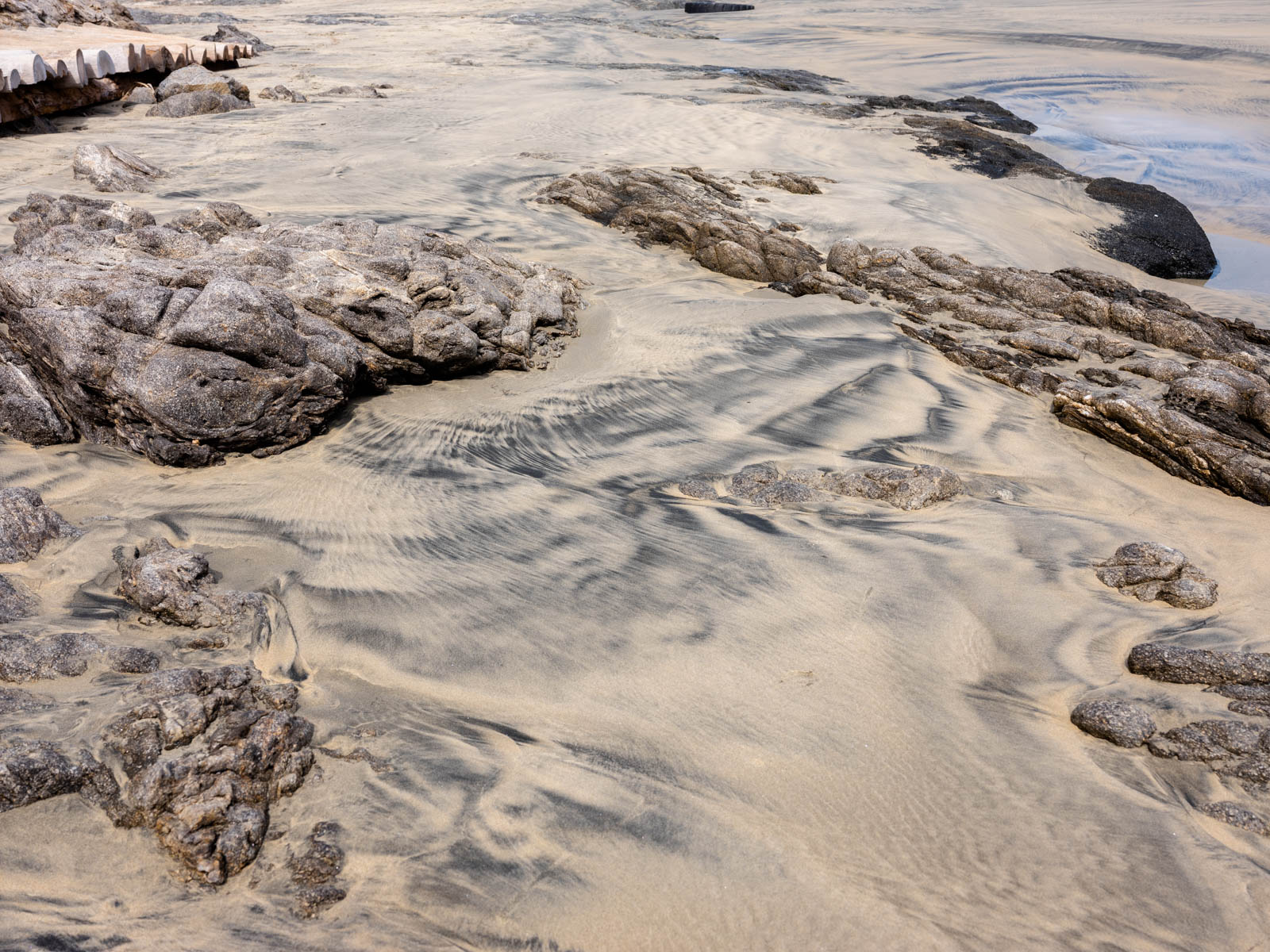 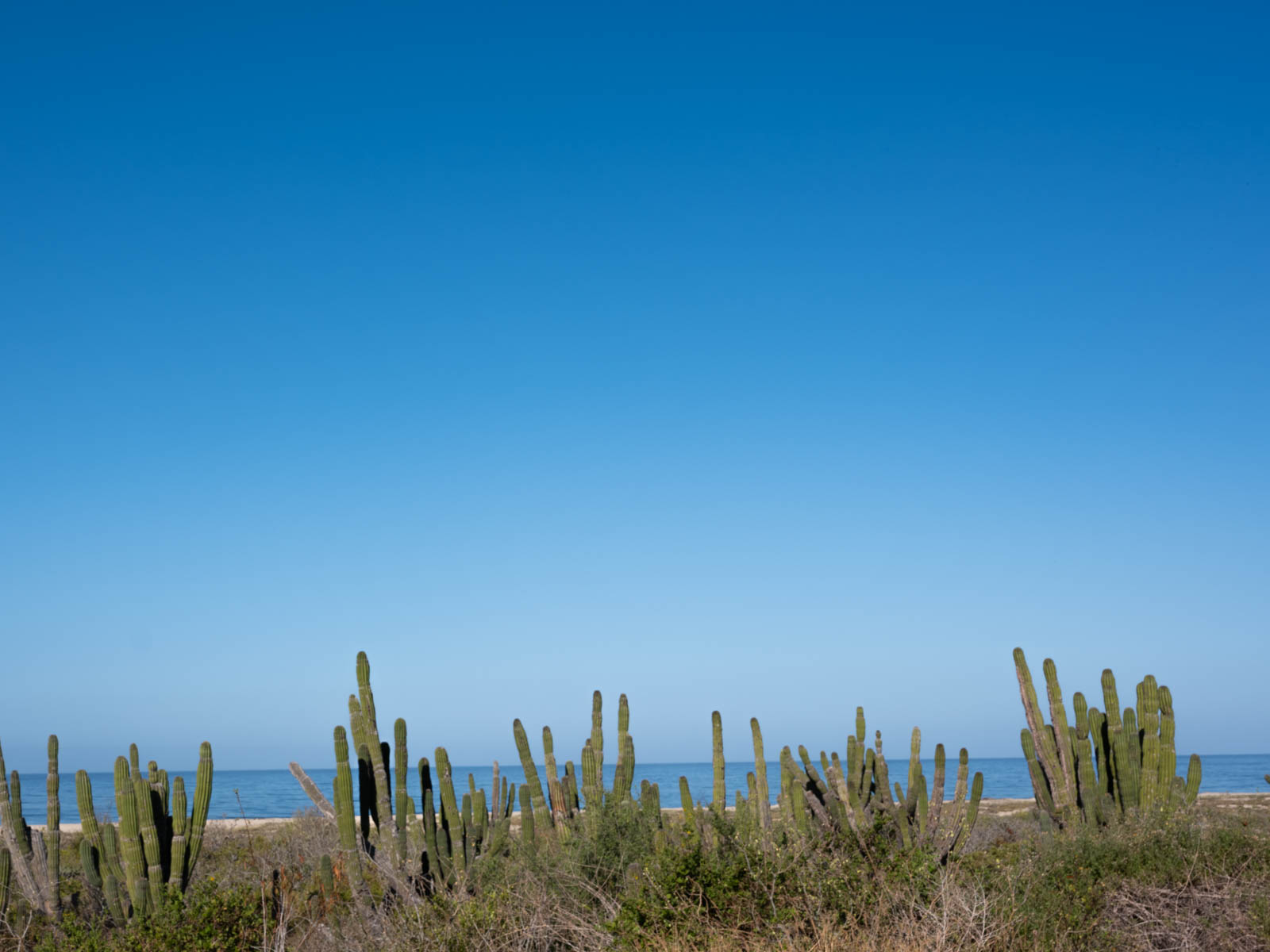 In Baja California Sur, an arid landscape meets the ocean.

My colleagues and I had driven there four days prior, determined, among other tasks, to find and photograph the damiana plant in its full splendor — that is, mottled with the yellow flowers that characterize it on Google searches. This was proving not to be an easy undertaking. The bloom is evanescent, and appears fleetingly after rainfall, which is sparse in the desert. It was the final day of our trip, and we’d had no luck so far, when we pulled over at the nursery after spotting a hand-painted sign that advertised damiana. Primitivo offered to take us to the hill where he, and others who sell the plant’s dried leaves, forage it. This practice — gathering plants from their natural, or “wild” habitat — is known as wildcrafting. In Baja California, it is the main way damiana is harvested.

Native to Mexico, South America, and the Caribbean, Turnera diffusa, or damiana, has been believed to have stimulant and antidepressant properties for centuries. In the late 17th century, a Spanish missionary named Juan María de Salvatierra documented the Maya peoples’ use of damiana, which they called miziboc, as a remedy for dizziness and fatigue, as well as a powerful aphrodisiac. The latter is a reputation it holds strongly still today. In Northern Mexico, it was used by the Guaycura people as a general invigorant and to treat the nervous system. Similar to the popular medicinal herb ashwagandha, damiana is an adaptogen, capable of lowering stress and believed to treat a slew of health problems, including asthma and other respiratory diseases, depression, digestive conditions, diabetes, menstrual disorders, impotence and prostate problems. Like other medicinal plants and ancestral methods of healing, it is currently experiencing a sort of cultural renaissance, though not without its backlash.

“My belief is people approach complementary medicine in two ways,” said Eric Small, MD. “They either accept it without critical thought simply because it’s alternative, or they reject it without critical thought because it’s alternative.” And though it is wise to cultivate a healthy level of skepticism for grandiloquent claims of all sorts, it is also necessary to be wary of the rampant cynicism that has gripped contemporary Western society. Applied broadly, this mindset has resulted in the destruction of ecosystems, the proliferation of depression and anxiety, and the general isolation that stems in part from feeling disconnected to our past. Many natural remedies, widely maligned as unfounded, are now becoming the subjects of scientifically rigorous studies which are often finding them to be effective.

"Many natural remedies, widely maligned as unfounded, are now becoming the subjects of scientifically rigorous studies which are often finding them to be effective." 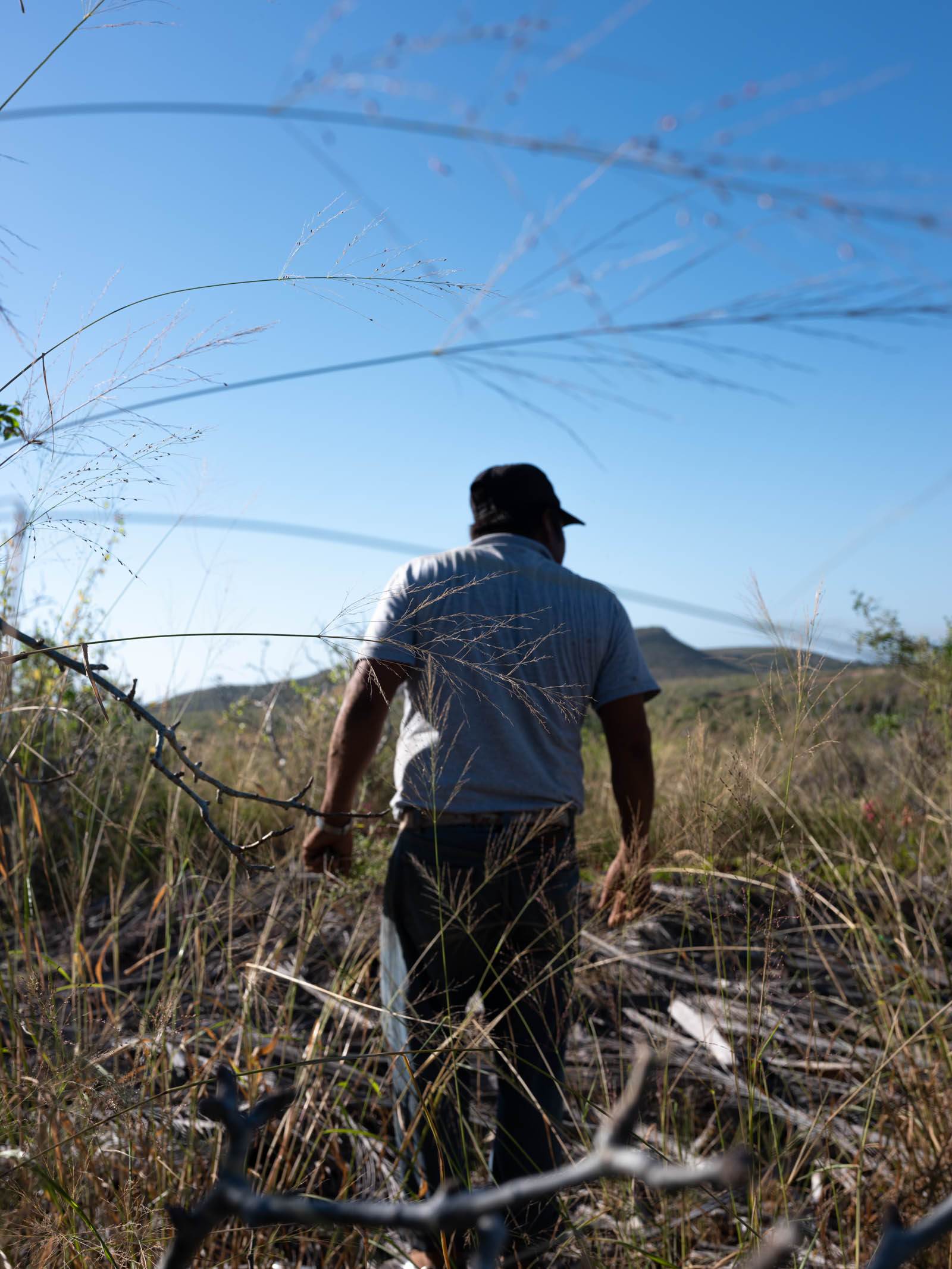 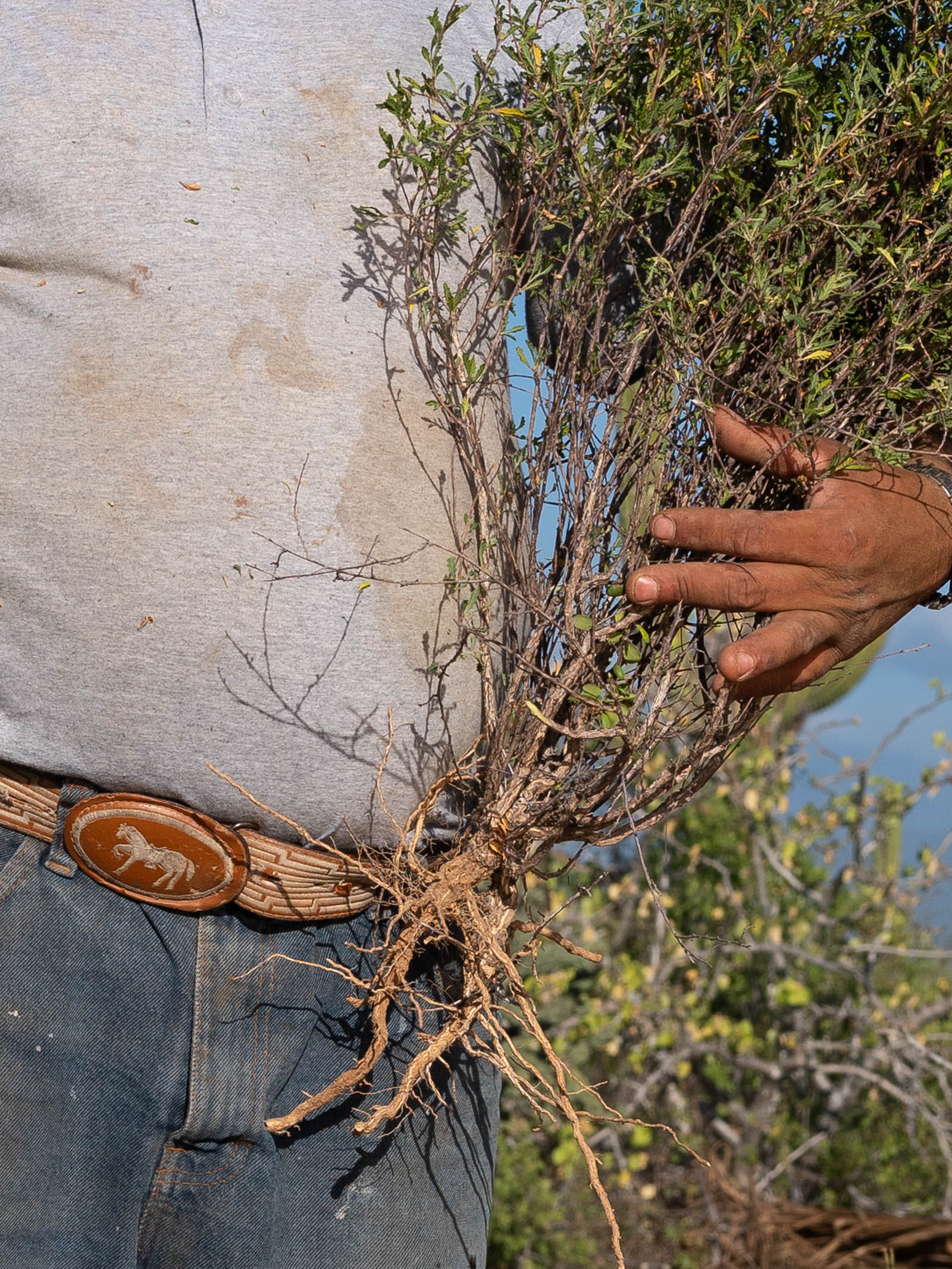 Primitivo Garcia navigates the hills where he wildcrafts damiana.

The general distrust around medicinal plants and their healing potential is largely a product of colonization. The authors of an article published in the Journal of Alternative and Complementary Medicine contend that “traditional medicine treatments and practices have long been subjugated, devalued, co-opted, and in some cases decimated across the globe within the context of European colonization. Still today, many indigenous healthcare systems remain under threat due to colonization’s impacts.” This despite the fact that up to a quarter of modern medicines are derived from natural products.

Primitivo, who is from the southern Mexican state of Oaxaca, traveled north a decade ago in search of work opportunities, and has never tried damiana himself. As a former addict and alcoholic, he is ascetic about avoiding any substance which promises to positively alter or enhance his mood, finding solace instead in the Bible. “There’s a lot of shamans and healers here, but I don’t believe in any of it, because I believe in God,” he told me. It’s worth mentioning that within the wellness industry, there’s a tendency to romanticize the work of people from marginalized or impoverished communities who harvest medicinal plants, ascribing a spiritual motivation to their labor. But often, they have lacked access to information about the products they sell, and do so simply to make a living.

What would it look like if the industry fostered a real commitment to inclusivity? If, instead of presenting a utopian world of wellness, it recognized inequality and became proactive about sharing knowledge and promoting diversity? It is imperative that people of all backgrounds have access to the benefits of medicinal plants, particularly because many of them are cultivated and harvested in developing countries. “The motivation behind this project is to understand not just the physical properties and benefits of medicinal plants, but also the cultural context that surrounds them,” says Travis Gumbs, founder of Medicinal Plant Index. “As a platform, I want it to promote transparency and acknowledge that the future of wellness can and should incorporate innovation, while carving space for voices that have been marginalized in the past.”

What would it look like if, instead of presenting a utopian world of wellness, the industry recognized inequality and became proactive about promoting diversity? 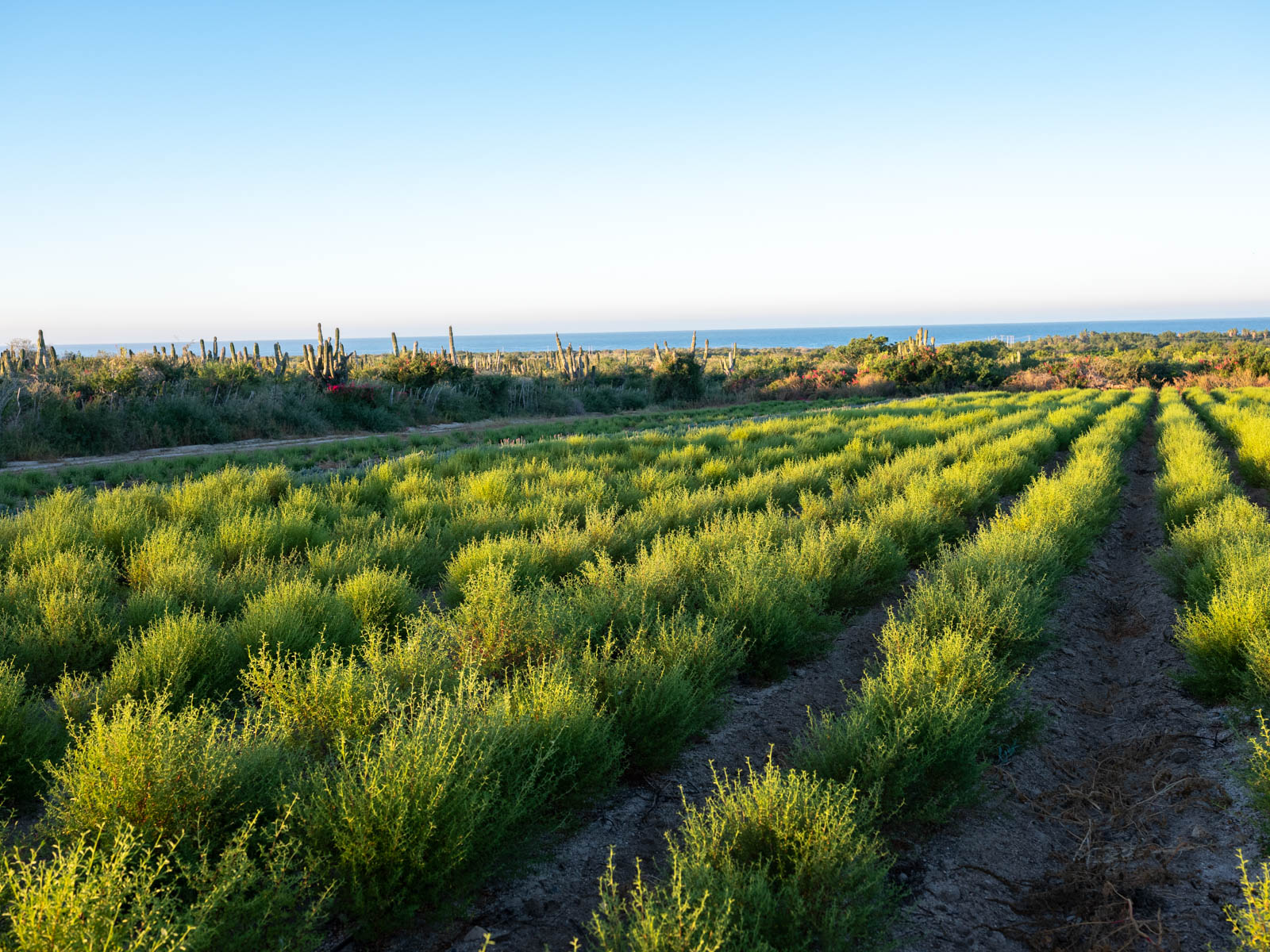 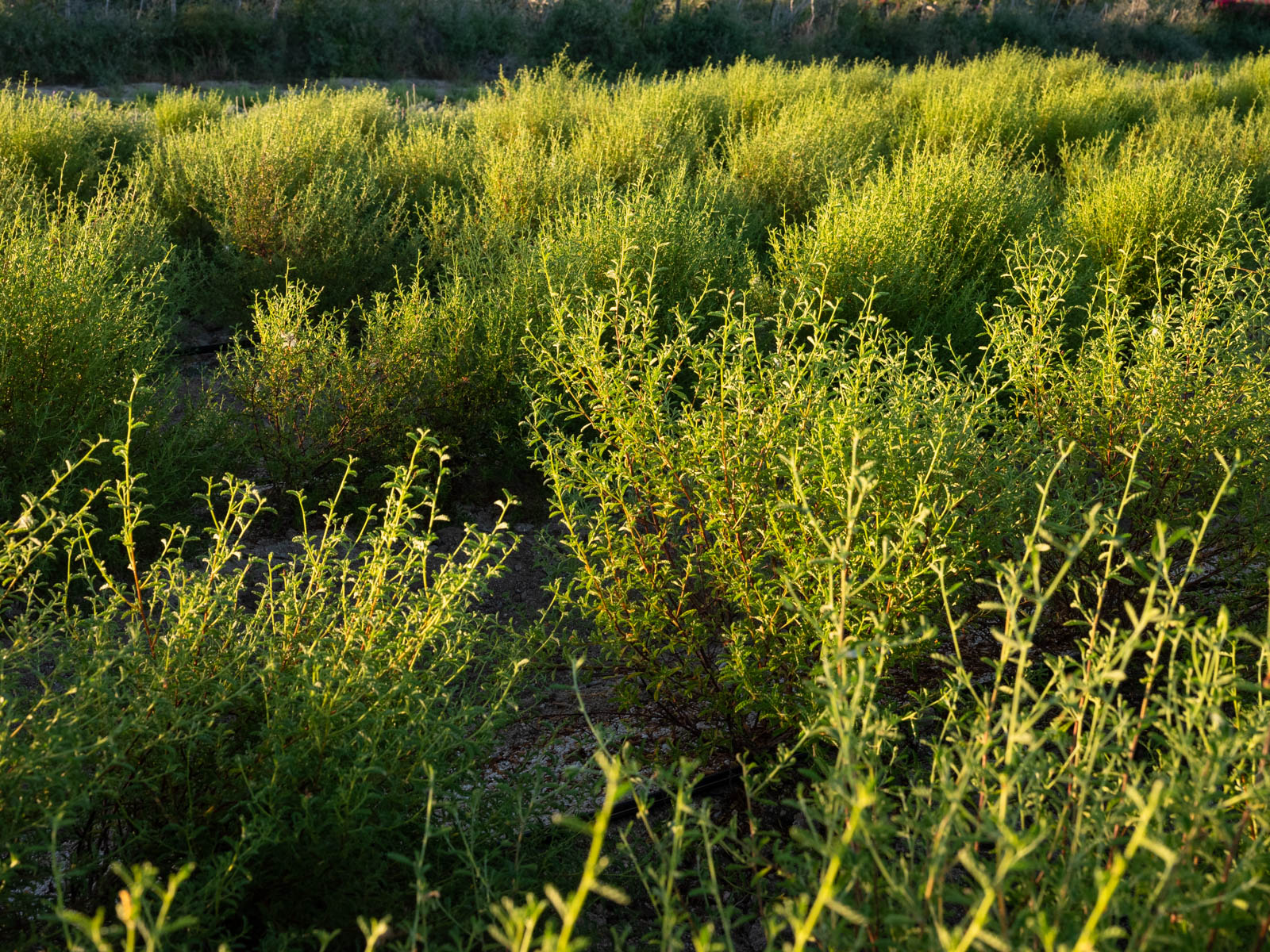 The first day my colleagues and I arrived in Todos Santos, we met Ross Vail, a tall and athletic man in his sixties, whose characteristic long, white beard is almost always framing a smile. Born and raised in Southern California, he moved to Todos Santos in 1984 after studying botany, to pursue his dream of settling down as a farmer. Ross seems to know everybody in town, and everybody seems to know him — more than once, when asking around for someone who could tell me about damiana, locals stopped me mid-sentence, saying simply: “Oh, you’ve got to meet Ross!”

Thirty-seven years after committing to his home, Ross has built a life, family, and community there, though it is clear when speaking to him that his deepest and longest held relationship is with nature itself. In 1985, Ross created the first certified organic farm in Baja California Sur, where he grows culinary herbs like basil, chives, mint, and oregano. As we walked around the crops, he would pause every couple of steps, exhilarated at the chance to explain the properties of each plant — where it comes from, why it smells or looks the way it does, what elements conspire to allow it to thrive in this corner of the world. He takes a fistful of leaves or a drop of sap in his hands and inhales the aroma with such genuine pleasure that it is clear this is his greatest passion. Ross is on these fields nearly every day, and still his thrill remains steadfast.

“I was kind of adopted by this community when I moved here in the eighties, and at that time there wasn’t a single restaurant in Todos Santos,” he recalls. “If you wanted to eat something, it had to be in your house, a neighbor’s house, or a friend’s house. My friends would have damiana tea to serve in place of something else — there weren’t even any sodas here.” At the time, the damiana Ross consumed was wildcrafted. After decades of experiencing its health benefits firsthand, he committed himself to learning how to cultivate it. The process took a year and involved much trial and error, analyzing the similarities between damiana and other herbs that he grew, and testing out the different processes he already relied on when farming. 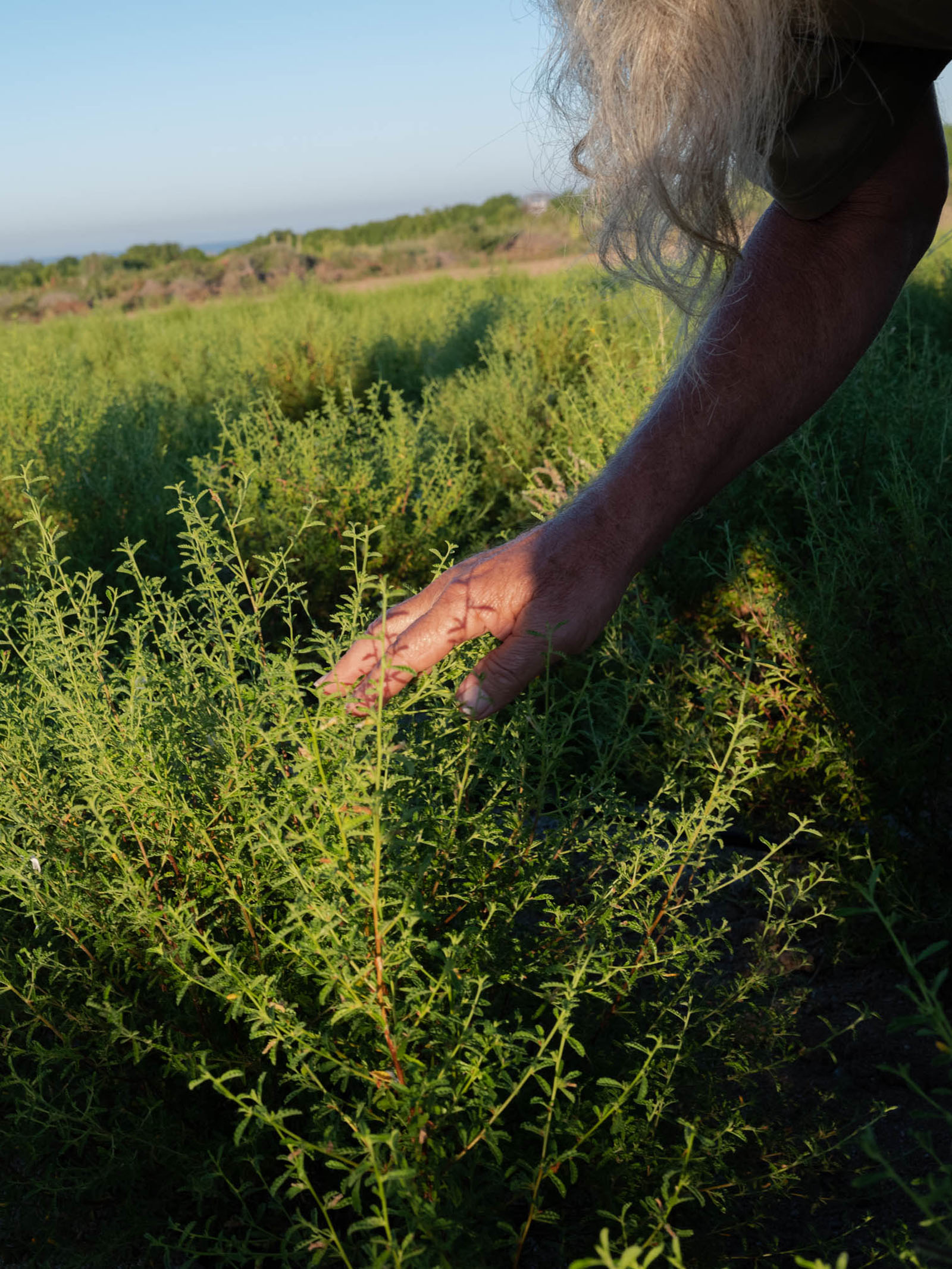 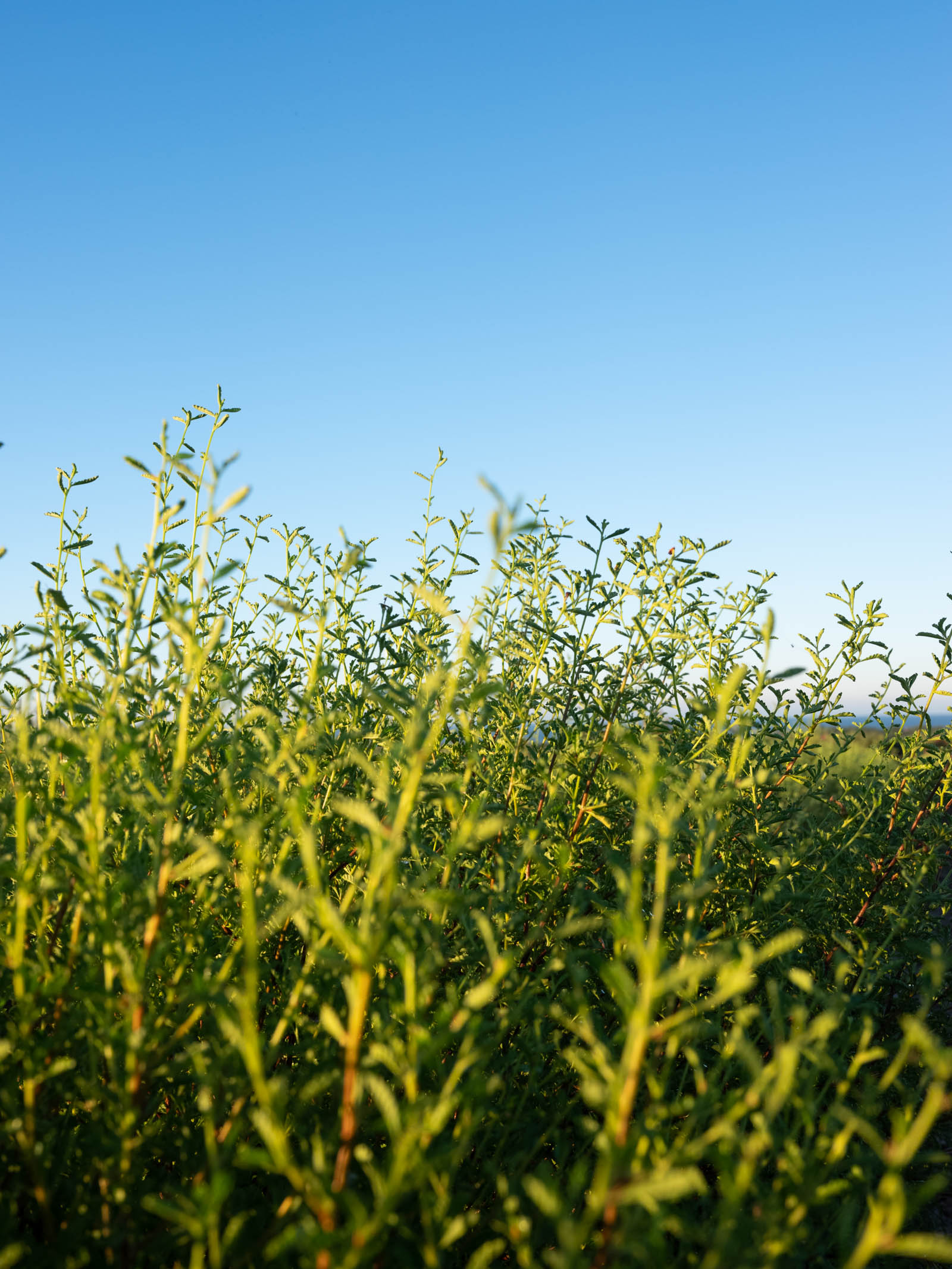 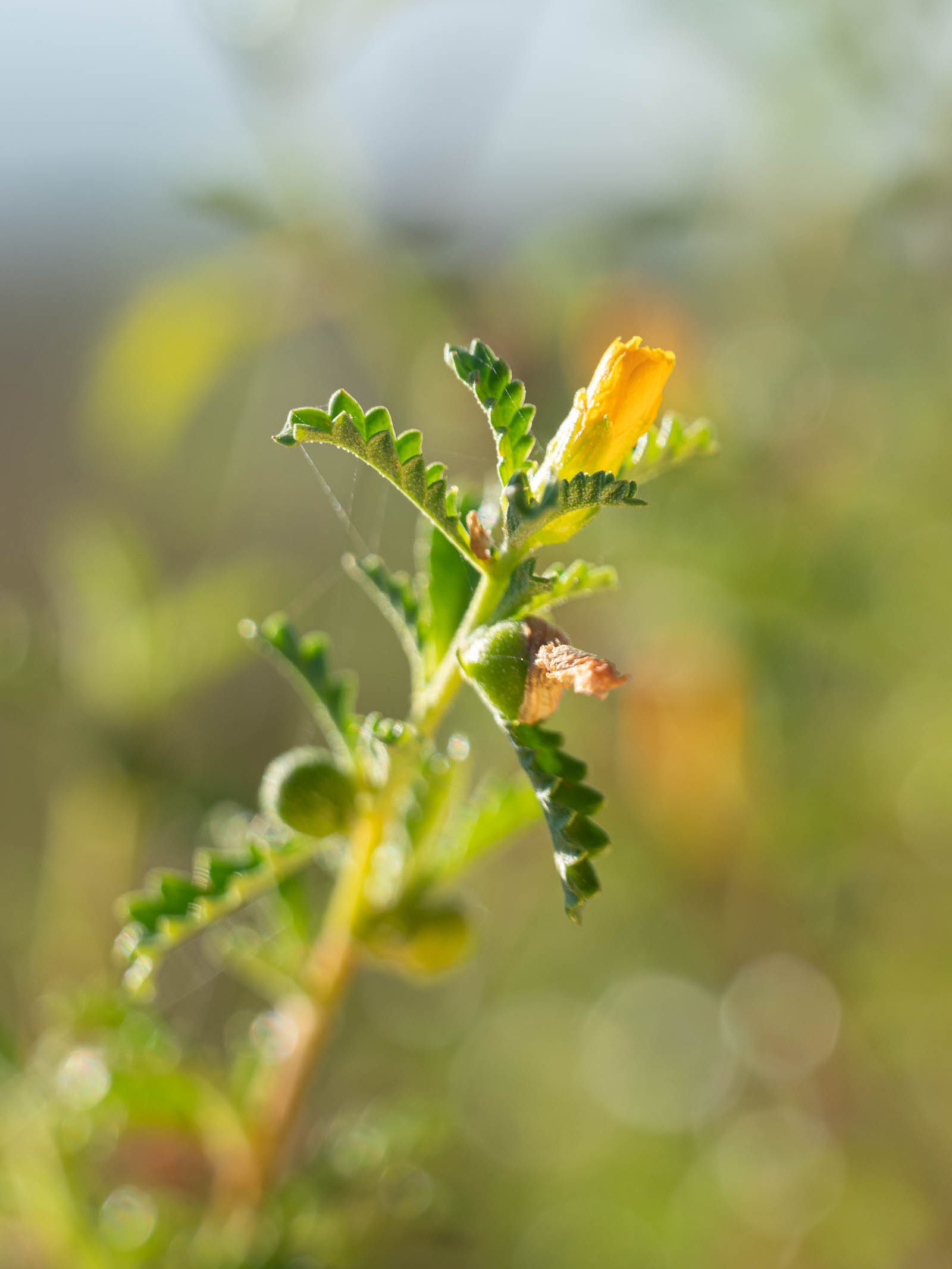 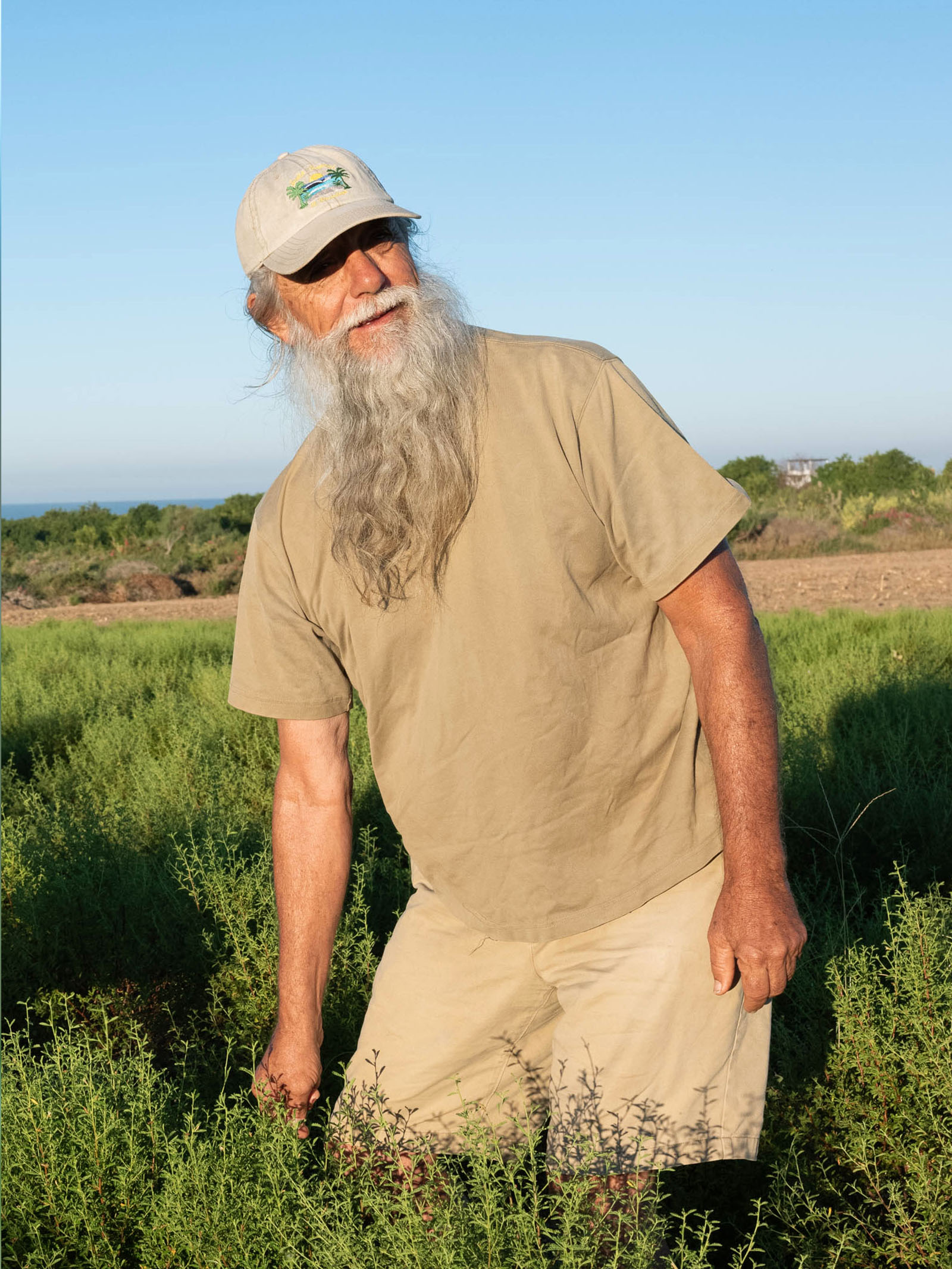 Pictured in his damiana field, Ross Vail explains that a plant can be harvested various times throughout the course of 3 years, its total lifespan.

Once he established the right protocols for cultivating it, he co-founded Flor de Amor, a company which sells various damiana-based products, along with his partner, Noel Cianci. The couple’s relationship to damiana could only be described as reverence — they assure it is not only an invigorant, but also a relaxing herb, able to read what your body needs at different moments of the day.

One morning at sunrise, Noel and Ross gave us a tour of their damiana farm, stopping to pass around a fistful of soft green leaves for us to smell, or point out a spider devouring a small moth on one of the shrubs. The crops were verdant, aromatic, and budding. Like damiana itself, some unopened flowers here and there were just beginning to reveal to us their full potential. “I’m open to anybody that wants to learn about damiana, and I’m here to learn from them, too,” says Ross. “From their mother’s story, their grandmother’s story, to their experiences today — sharing experiences is how we grow and improve as a community.”

We had almost accepted the idea of leaving Todos Santos without it, but in the end, we did find the elusive bloom. Deftly maneuvering the hill in his leather sandals, Primitivo spotted a spark of yellow, almost entirely obscured by the wilderness. There, in its natural habitat, the tiny flower stood fully unfurled. 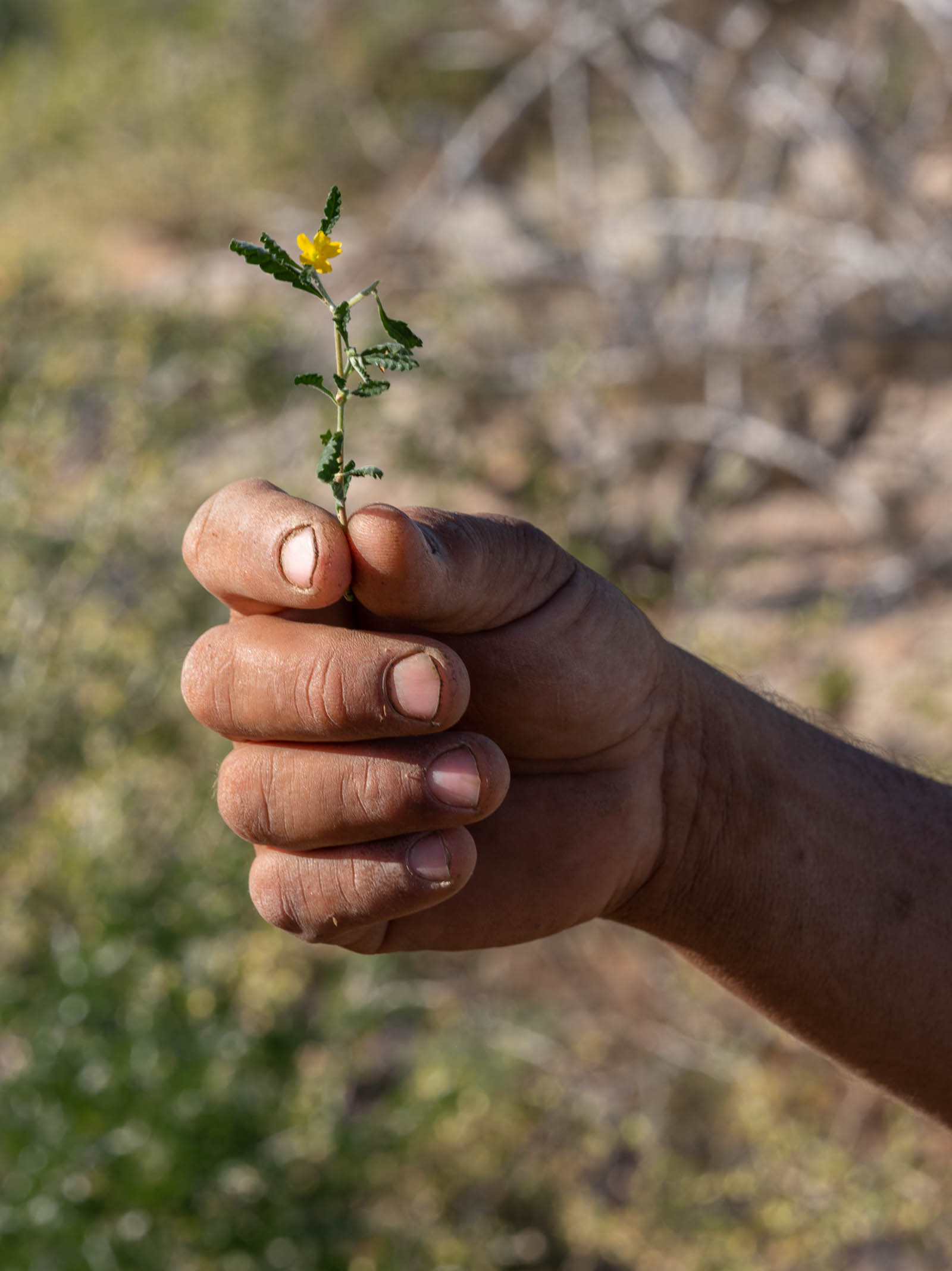 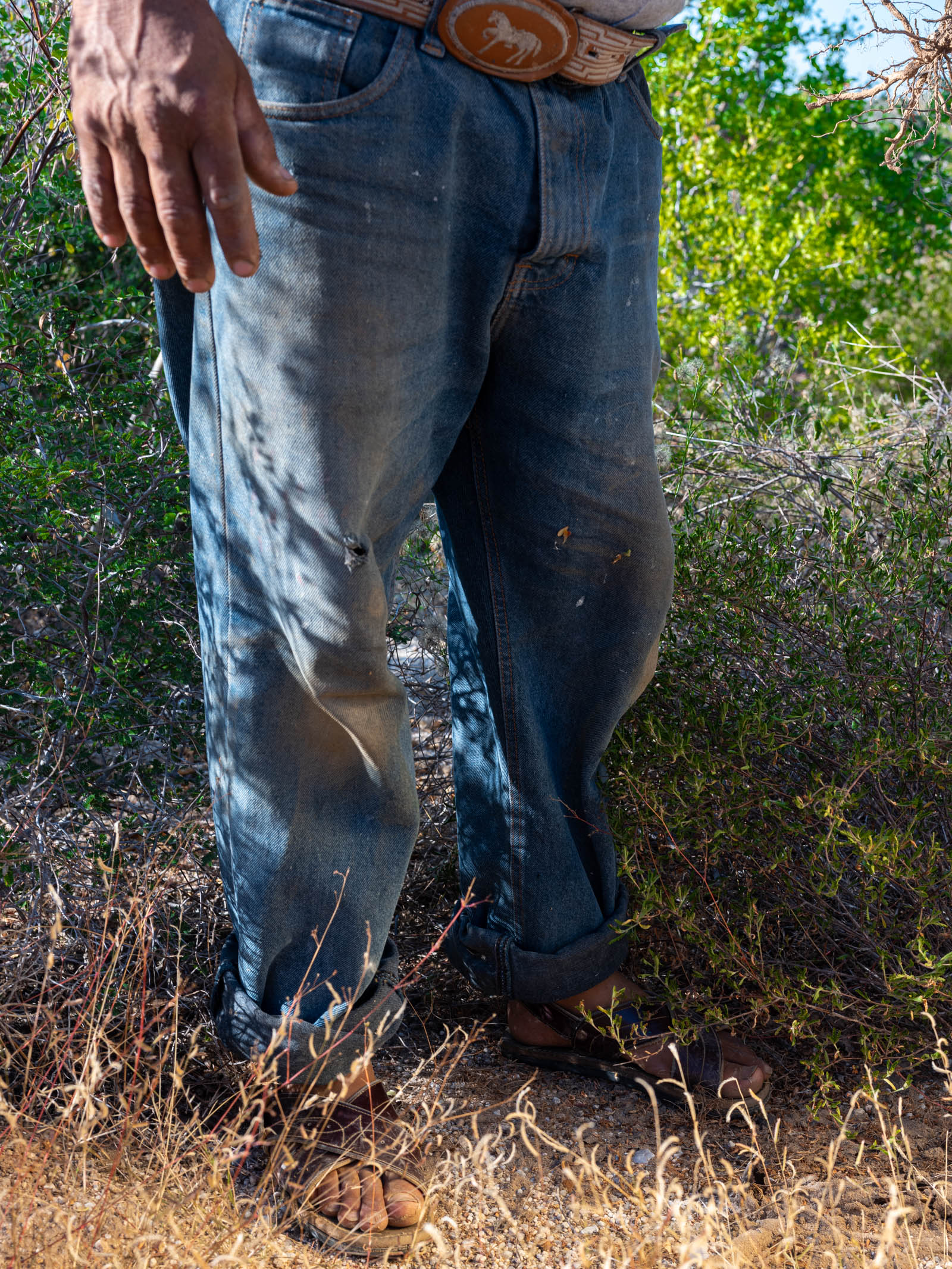 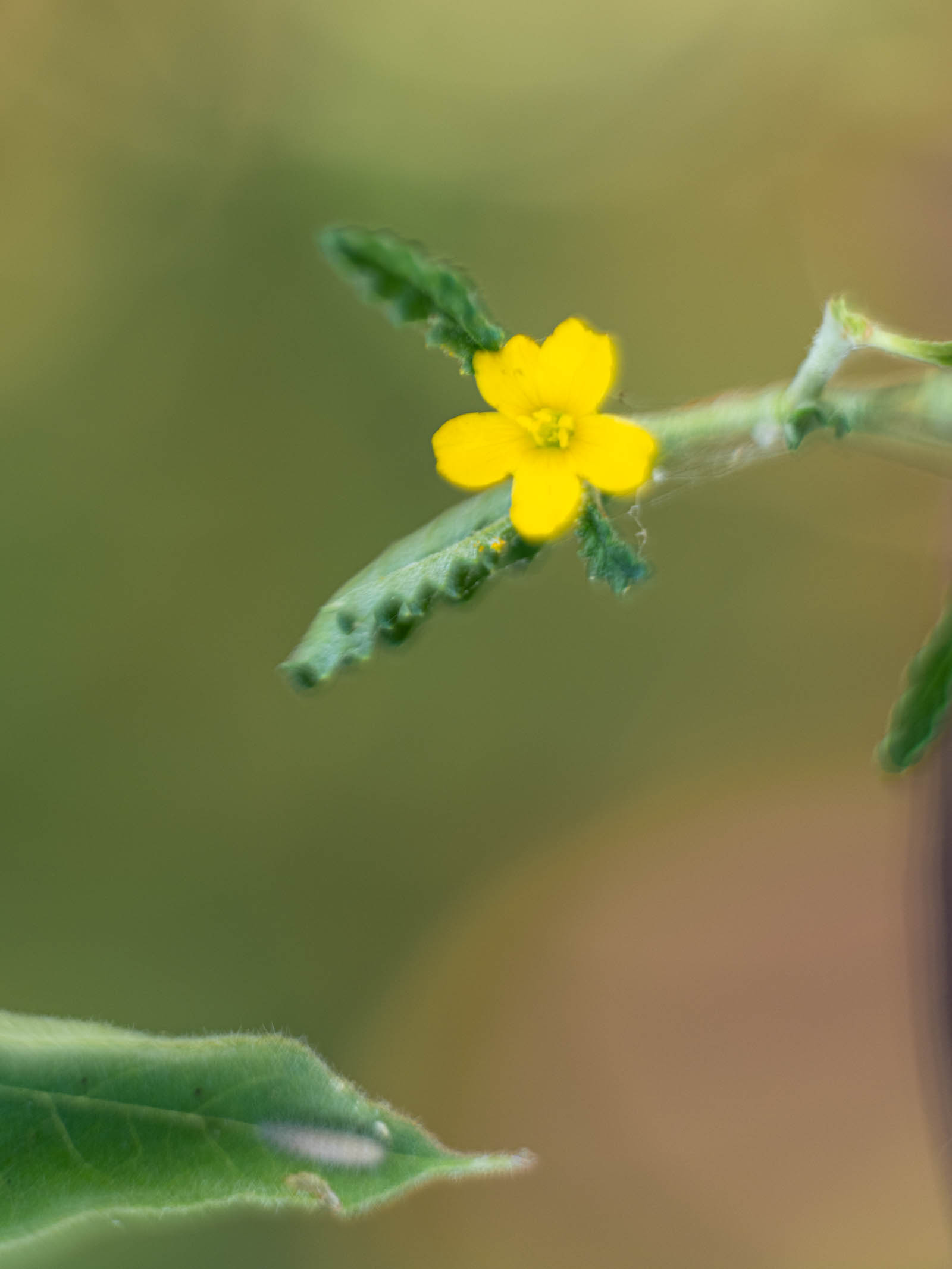 Home » In Search Of Damiana