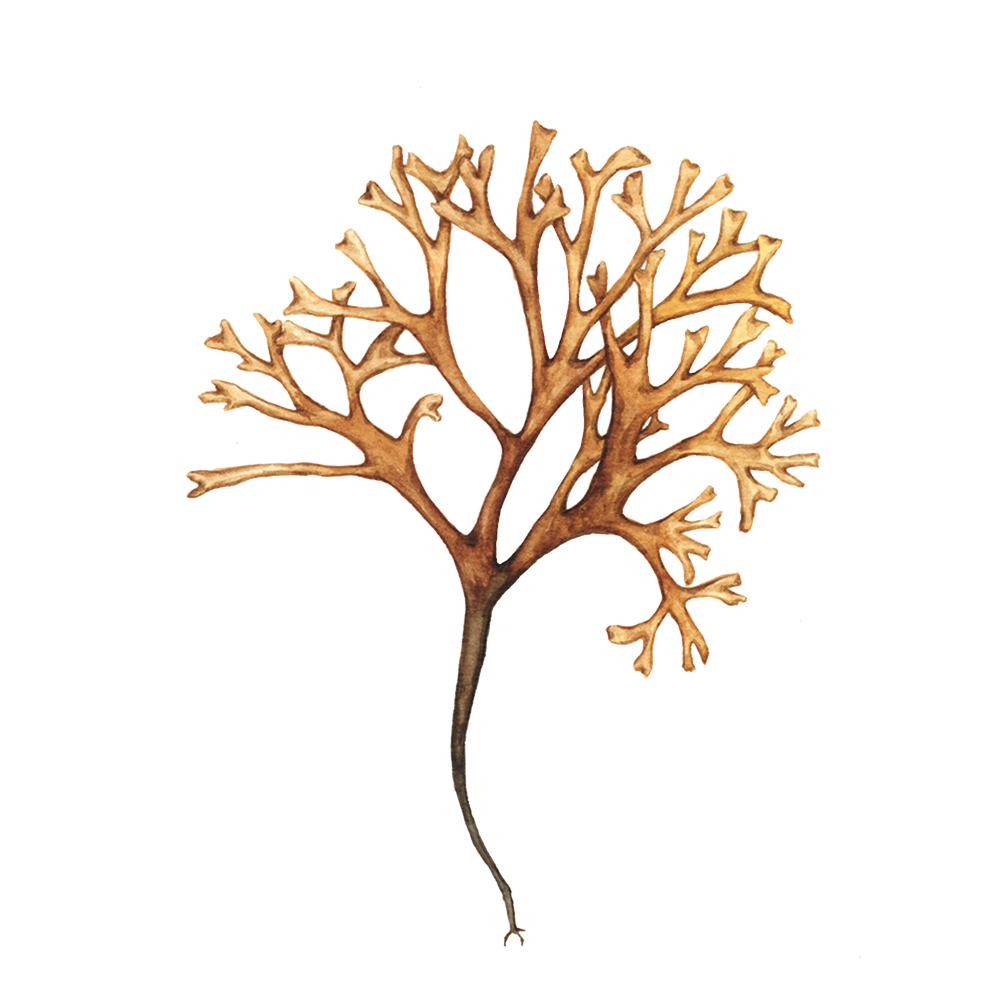 Chondrus crispus, commonly known as Irish Moss and Carrageenan, is a seaweed with flat leaves and a reddish-purple tint. It usually grows only in the colder waters found in North Atlantic coastlines. Chondrus crispus, the rarest variety of Sea Moss, has the shortest growing season of all strains, with extremely specialized growing conditions – it only grows along rocky and cold coastlines.

Ireland is home to an extensive coastline that boasts these exact conditions, and during times of extreme famine, the Irish would turn to Irish Moss as a much-needed nutritional food source. Beginning in the 1600’s, and extending into the late 1800’s, an influx of Irish nationals began arriving in the Caribbean.  It was through this migration that Caribbean Sea Moss, Gracilaria, came to be mistakenly called “Irish Sea Moss,” as Irish immigrants substituted this strain for the Sea Moss grown in their native waters.

Gracilaria is a tropical strain that differs from Chondrus crispus in numerous ways. It is characterized by thinner leaves, a sunny golden yellow color, and is native to the Caribbean’s warmer seas. With a much longer growing season, as well as the ability to grow on many surfaces, Gracilaria lends itself to sustainable farming in tropical environments worldwide.

Taken together, Chondrus crispus and Gracilaria provide several essential elements that sustain and nourish the human body. These seaweeds are a “rich source of bioactive molecules with potential as nutritional supplements, pharmaceuticals, cosmeceuticals, fine chemicals and enzymes.” Both Chondrus crispus and Gracilaria provide numerous minerals needed by our bodies for optimal function, including calcium, iron, magnesium, potassium, selenium, iodine, and zinc, among others. Both strains also contain Vitamins A, thiamin, riboflavin, B12, C, D, E and K. , As with any natural product, the exact level of nutrients, vitamins and minerals varies based on environmental conditions at the time of its growth.,

Due to the high mineral and vitamin content found in these types of Sea Mosses, they have been used to support a healthy immune system, provide the prebiotics and fiber needed to create and maintain a healthy gut microbiome, raise energy levels, improve mood, enhance joint function, increase libido levels, and improve the appearance of skin, among other benefits.

Furthermore, Carrageenan, a dietary extract found in Chondrus and Gracilaria, has been shown to have antimicrobial, blood-sugar reducing, and blood lipid (fat) decreasing properties in addition to supporting the immune system., There is also some evidence that it inhibits the growth of cancer cells.